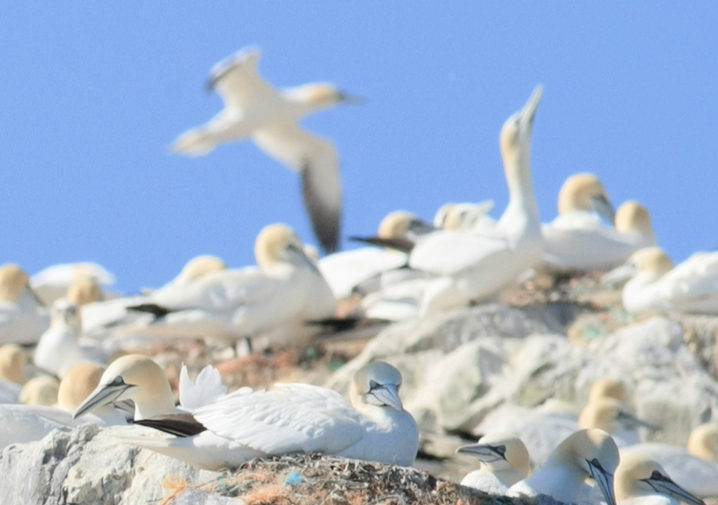 RSPB staff landed on Grassholm on 4 occasions in 2012 and all records are taken from these visits along with records from a round island trip on 22nd September.

Visits on 14th -15th July, 24th-26th July and 8th-9th August saw a continuation of the data logging work by Dr Steve Votier and his Plymouth University team, now in it’s 7th consecutive year gathering data on the foraging and migration strategies of northern gannets. Productivity work was also undertaken by RSPB staff during these trips.

A final trip was made on 13th October for the annual task to cut free gannets tangled in marine debris. Special thanks for help on this trip to Steve Votier, Kirsten Archibald, Nia Stephens and Tim Brooke. 62 young and 2 adults were cut free in 2012 (the second highest total in the past 8 years). Since 2005, a total of 426 birds have been cut free. Two members of the Royal Commission on the Aerial and Historical Monuments of Wales (RCAHMW) accompanied us on the October trip and made some fascinating discoveries on previous seasonal settlements on the island.Thanks to Venture Jet for safe passage on all journeys

Manx shearwater Regular offshore, no evidence of breeding this year.

STORM PETREL Confirmed breeder. 3 nest sites located by day (these were 3 of the 5 located in 2011)

Puffin 20 close in to the South Gut on 14th July

Open: 1st April (or Easter if earlier) to 31st October