Ramsey was purchased by the RSPB in 1992 and was designated a National Nature Reserve in 1996 due to its internationally important flora and fauna, including 20 species of rare plants, breeding Chough and Lapwing and the largest Grey Seal colony in Wales.

The island is awash with colour from May to September, with bluebells, then pink thrift and purple heather.  At nearly 120m (400 ft.) the Western cliffs are among the highest in Wales.  They are home to Ravens, Peregrines and Buzzards.  In spring, Guillimots, Razorbills, Fulmars and Kittiwakes come to nest.  Chough also breed on the these cliffs, seeking out deep fissures and caves in which to build their nests.  From mid July however, the cliffs empty as the auk chicks head out to the open sea.

From August it is time for the Atlantic Grey Seals to pup, several hundred seal pups are born each year on Ramseys beaches and in the caves.  The Southern heathlands are a special combination of heather, gorse and coastal plants.  In August they come into their glory, when the heathers and gorse flower together.  This habitat is the haunt of Stonechats, Meadow Pipets, Linnets and Skylarks.

The summits of Carn Ysgubor and Carn Llundain give splendid views to the mainland, south to Skomer Island and on the clearest days, West to Ireland. Look out for Wheatears, Pipits and feeding Choughs. 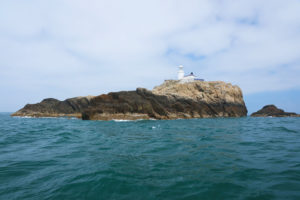 Designed by James Walker, it was built on the island in 1839, acting both as a waymark for vessels navigating offshore and as assistance to ships navigating around the island group.  The lighthouse was converted to electric in 1959, and in 1971 a helipad was constructed.

The lighthouse was automated and demanned in 1983, like many in the UK, it is monitored from the control centre at Trinity House in Harwich.  It was built in the path of migrating sea birds and the brilliance of the light at night led the birds to dash themselves against the lantern.  Many died and when Trinity House and the Royal Society for the Protection of Birds teamed up, they came to the conclusion to build special bird perches on the side of the lighthouse lantern. After this the amount of deaths decreased considerably.

The islands behind Ramsey Island are collectively know as the Bishops and the Clerks, they are owned by the RSPB with the exception of the South Bishops which belongs to Trinity House. On Carreg Rhosson and North Bishops there are 150 pairs of Storm Petrels, small numbers of Guillimotts and Razorbills, with a small colony of Puffins on the North Bishops Island. 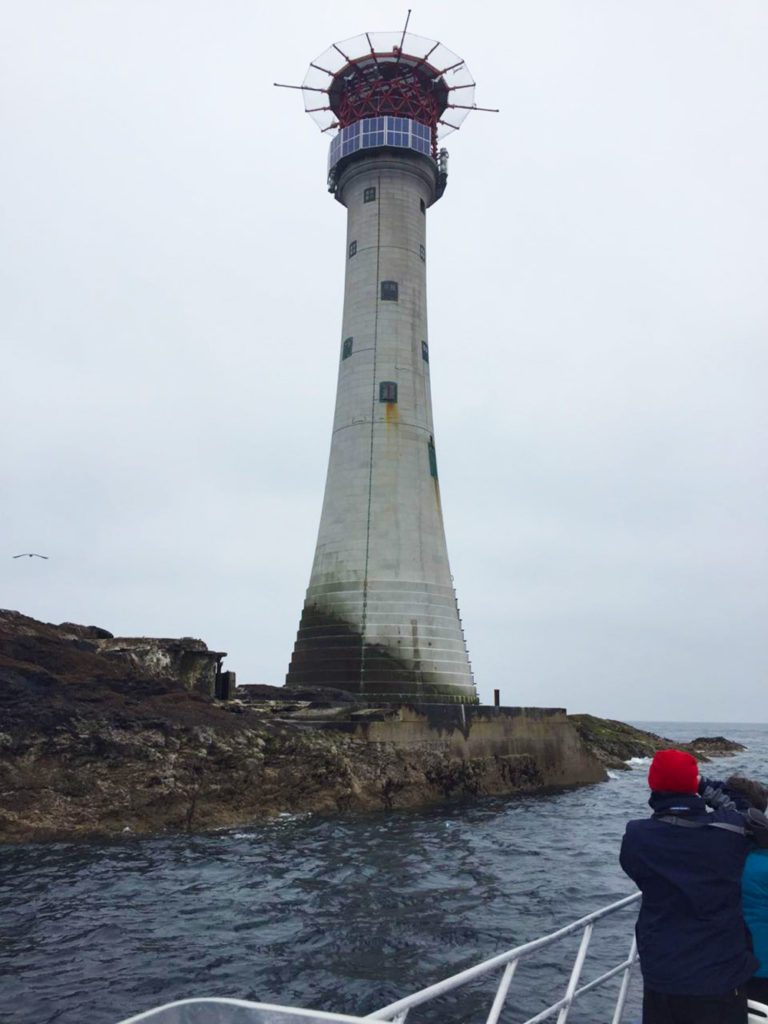 The Smalls Lighthouse stands on a small rock approximately 20 miles (32 kilometres) west of St David's Peninsula.   The lighthouse is the most remote lighthouse operated by Trinity house.

The original Smalls Lighthouse was erected over 1775 and 1776, on the plans of Liverpool musical instrument maker Henry Whiteside.  It stood on nine oak pillars, allowing the sea to pass through beneath.    Although it suffered from some rocking, it stood for 80 years.  During its life a significant number of extra struts were added beyond the original nine.  The pillar-based design has since been used successfully in many sea structures.

The current Smalls Lighthouse.  In 1859 Trinity House, having bought out the previous leaseholders in 1836,  began the construction of the current Lighthouse.  The tower was completed in 1861.  In 1978 a helideck was erected above the lantern and in 1987 the lighthouse was automated.

The first wind-and solar-powered lighthouse in the UK. Although it has only a 35 watt bulb, with the aid of lenses, this can be seen up to 21 miles (34 km) away. It was the first lighthouse in the country to have an installed flushing toilet. 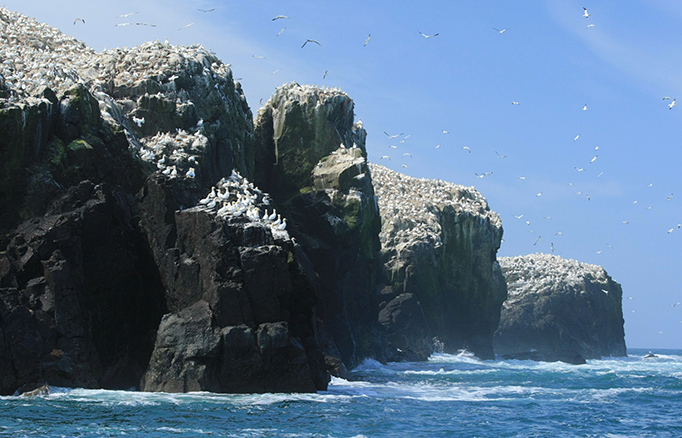 The RSPB island of Grassholm is a remote offshore island supporting over 36,000 pairs of breeding gannets.  This is the fourth largest colony in the world for this breed.

The uninhabited rocky island of Grassholm lies 15 kilometres west of the Marloes peninsula in south Pembrokeshire. It is remote and exposed, surrounded by difficult and turbulent seas.   Grassholm Island was the first RSPB reserve established in Wales in 1948 and public landing is not permitted.

The island comes alive in early spring, with gannets returning to the island from late February onwards.  The air is filled with males returning with nesting materials keen to establish territory ready to attract a female.  A single egg is laid in April and chicks begin to hatch in early June.  The chicks are then fed by both parents for 90 days until they are fully grown and ready to leave the island in late August and throughout September.